I’m getting an error from each of my xUnit test projects that there is a package downgrade from Microsoft.NETCore.App from 2.0.9 to 2.0.0.

I tried isolating the issue to one project so I unloaded all the test projects in my solution. Then I tried upgrading the version of .NET Core from v2.0 to v2.1. However that produced the following error:

My project dependencies are lit up: 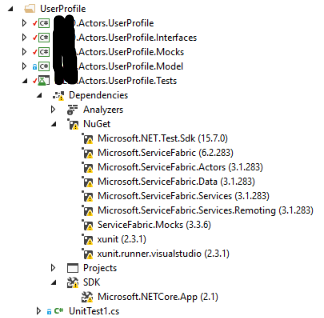 The projects are as follows: 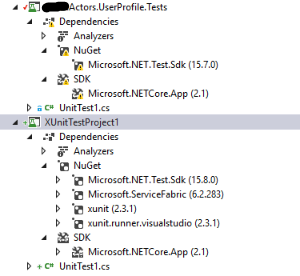 However there is one small difference. XUnit is being referred to using a “DotNetCliToolReference” instead of a “PackageReference”. When I make the change it finally works.

After I got that working I ran into some compile time errors:

CS0246 The type or namespace name ‘RemotingListener’ could not be found (are you missing a using directive or an assembly reference?)

CS0103 The name ‘RemotingListener’ does not exist in the current context

CS0246 The type or namespace name ‘RemotingClient’ could not be found (are you missing a using directive or an assembly reference?)

CS0103 The name ‘RemotingClient’ does not exist in the current context

With this small change I was able to get one of my actors building. Now I just need to update all the rest!

However, I still get the same error yet its now incremented the version downgrade from 2.1.3 to 2.1.0! Oh the insanity!

Maybe I need to update XUnit?

So after a bit more digging I found this thread on GitHub that lead to me actually solving the problem.

Of course, replaysMike probably had his .NET Core projects reporting v2.1.2 while mine have since incremented to v2.1.3. Low and behold, when I applied the change by editing the configuration as follows:

It worked! My dependencies updated with a reference to .NET Core v2.1.3.

So to recap, the steps I had to follow were:

And it worked just like magic. Looking back, I probably didn’t need to go through all the trouble of updating my version of Service Fabric / .NET Core / etc but after I did all the work, I’m not reverting!